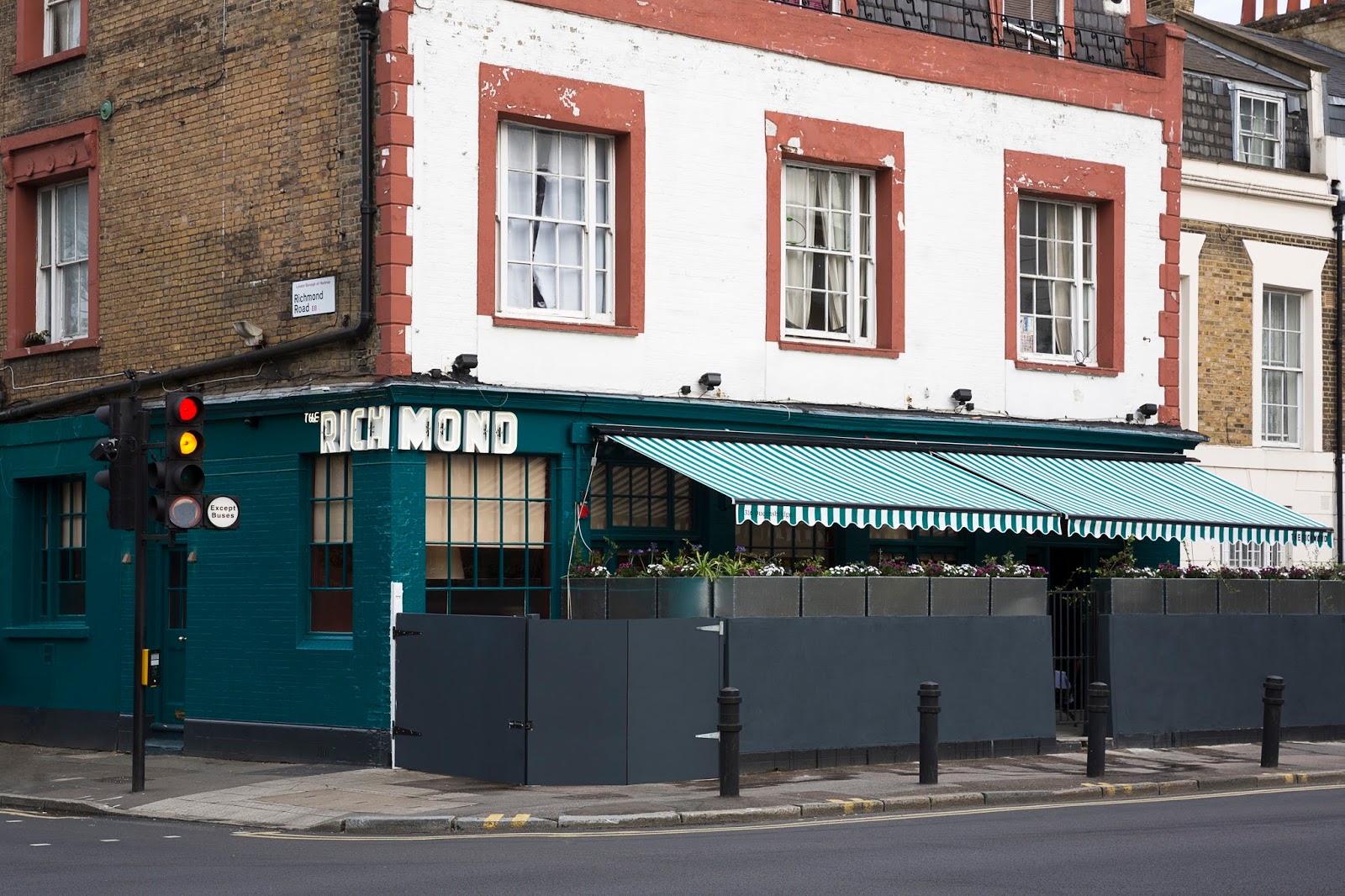 What was until recently nomad land between Dalston, Haggerston and London Fields just landed on the culinary map, thanks to the arrival of The Richmond, East London’s first restaurant with raw bar, and subsequently, its most fashionable hang out. In short, it’s excellent – quite easily one of my favourite restaurants of the moment but I’ll go ahead with a few more details…

The Richmond is the product of Brett Redman, of Michelin Bib Gourmand winning café, Elliot’s in Borough Market, and Margaret Crow, a fashion stylist who’s worked for the likes of i-D and LOVE — a winning combo for a buzzy East London resto, right? They set out to create a ‘welcoming neighbourhood spot’ with a menu that centres around oysters and comfort food. With it came the accolade of having East London’s first raw bar, a highlight that undeniably sets this place apart from places like Duke’s Brew & Que, Haggerston’s most celebrated neighbourhood eatery, and will do wonders in drawing in a crowd – people love a ‘first’ or ‘only’.
With the help of interior decorator Adam Bray, they’ve transformed what was once The Richmond Arms pub into a slick and refined venue, with red-painted panelled walls, leather-padded seats, amber lighting, and a prettily lit, well-stocked back bar. My favourite bit has to be the oyster-shaped lampshades, and later we’re treated to oyster shaped side plates, and are told there are oyster shaped pails downstairs. I like it, take something and run with it. Definite pub vibes remain and the new décor has been designed so to complement the period features of the original building. 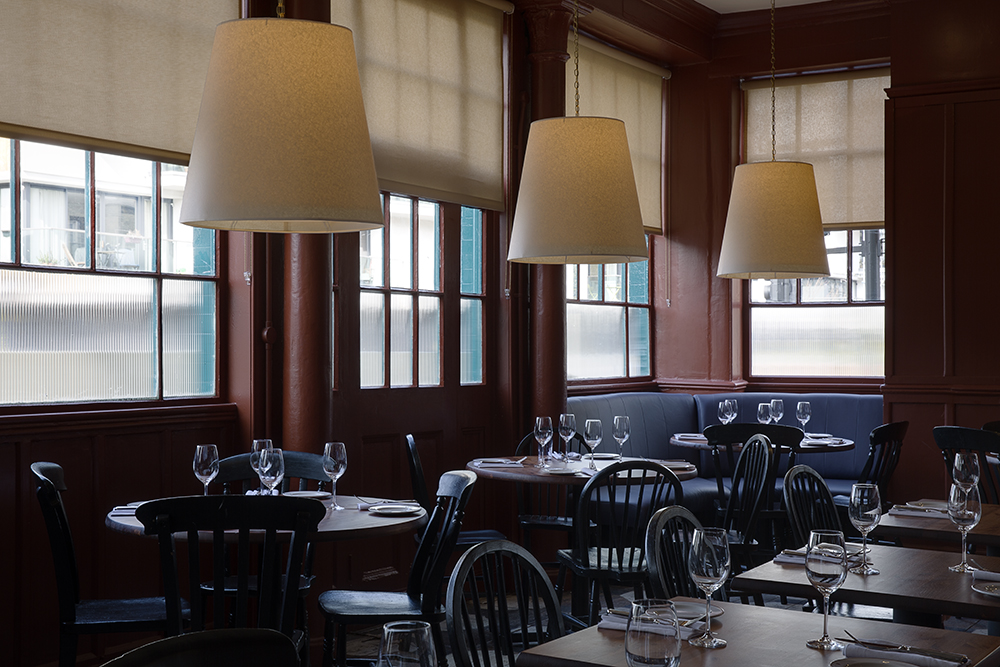 It’s a Monday night, it’s only been open 2 weeks and it’s pretty much full. Aside from one large-ish table, which is seated with impossibly stylish women that clearly work in fashion, the rest of the tables are for 2 or 4 people, so it all feels rather intimate. Talking to the lovely Australian waiter, he tells us conversations among guests get competitive. “I’m two streets over”, “Well I’m just down the road”, they bicker. It might be new but it’s already a spot locals are desperate to be in with.
Now, confession time, I actually hate oysters. Can’t stand them. They simply don’t go down. So instead of nodding along and ordering before having to race to the bathroom, my partner and I skirt the dedicated oyster menu and move straight on to the main one, which is sorted into Raw, Starters, Mains and Sides. If you do like Oysters, this place is great. There are 7 different ones to choose from, hovering around the £2.50 mark each, but a 5pm Monday-Friday they do a £1 Oyster Happy Hour. Sounds so great, if only I liked oysters. 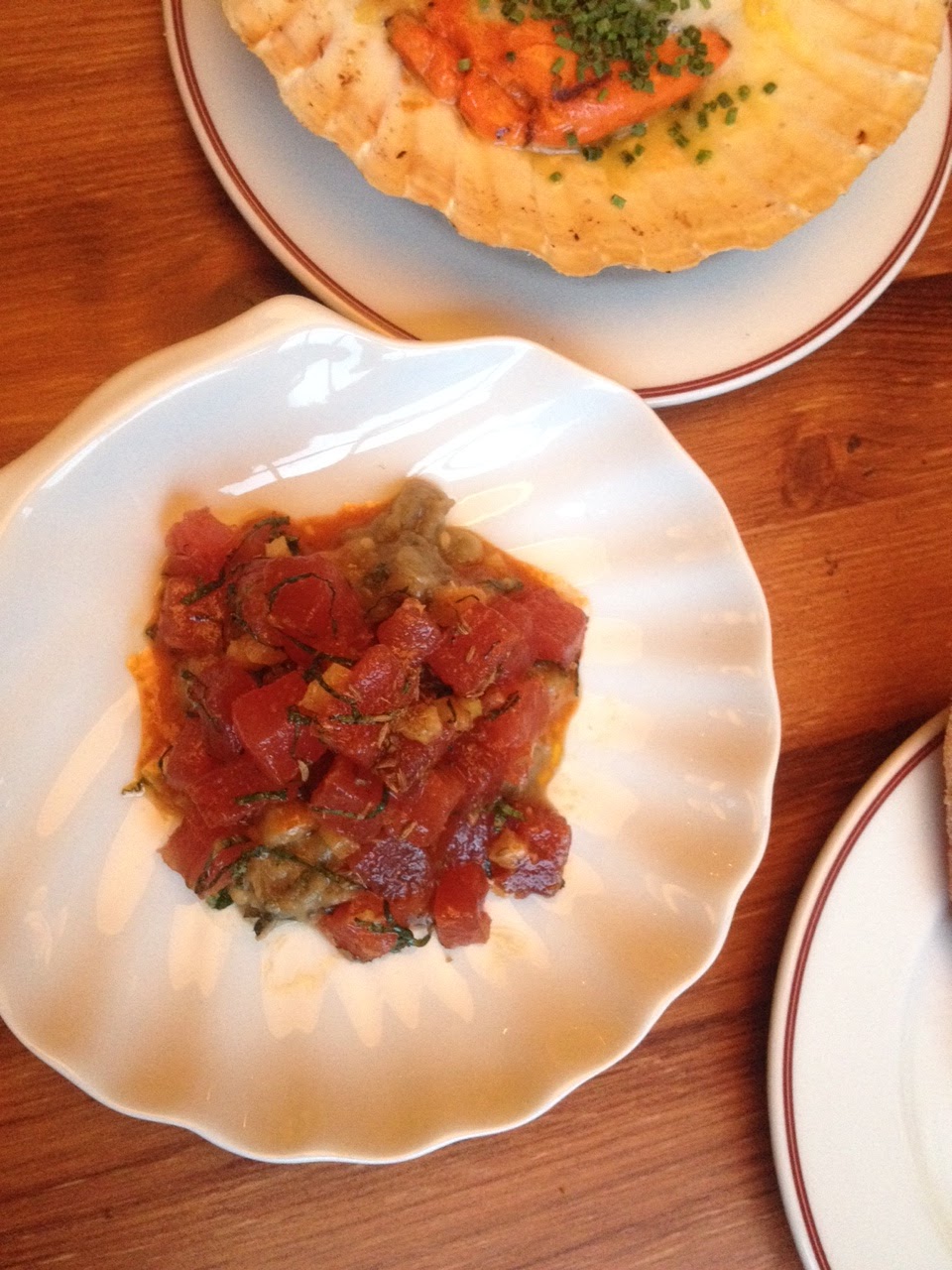 Things kick off on a good foot with the tuna tartare, which is quite easily the best I’ve had. Served on the aforementioned oyster-shaped plate, fresh chunks are mixed harissa and cumin seeds, which add an extra texture and confuse my mind flavour-wise in a good way. The hand-dived scallop is served in a clamshell and though only one, is giant and juicy enough to cut in half and share.
Don’t overlook the crispy prawns. Yes, everywhere does crispy prawns but here they turn out to be one of the highlights of our visit. They’ve been fried shell on in a light batter, and you’re advised eat the whole thing – shell, tail, eyes and all. Think about it too much and it’s gross, but instead enjoy them as they melt in your mouth. There are 4 in a serve and I made the mistake of sharing. 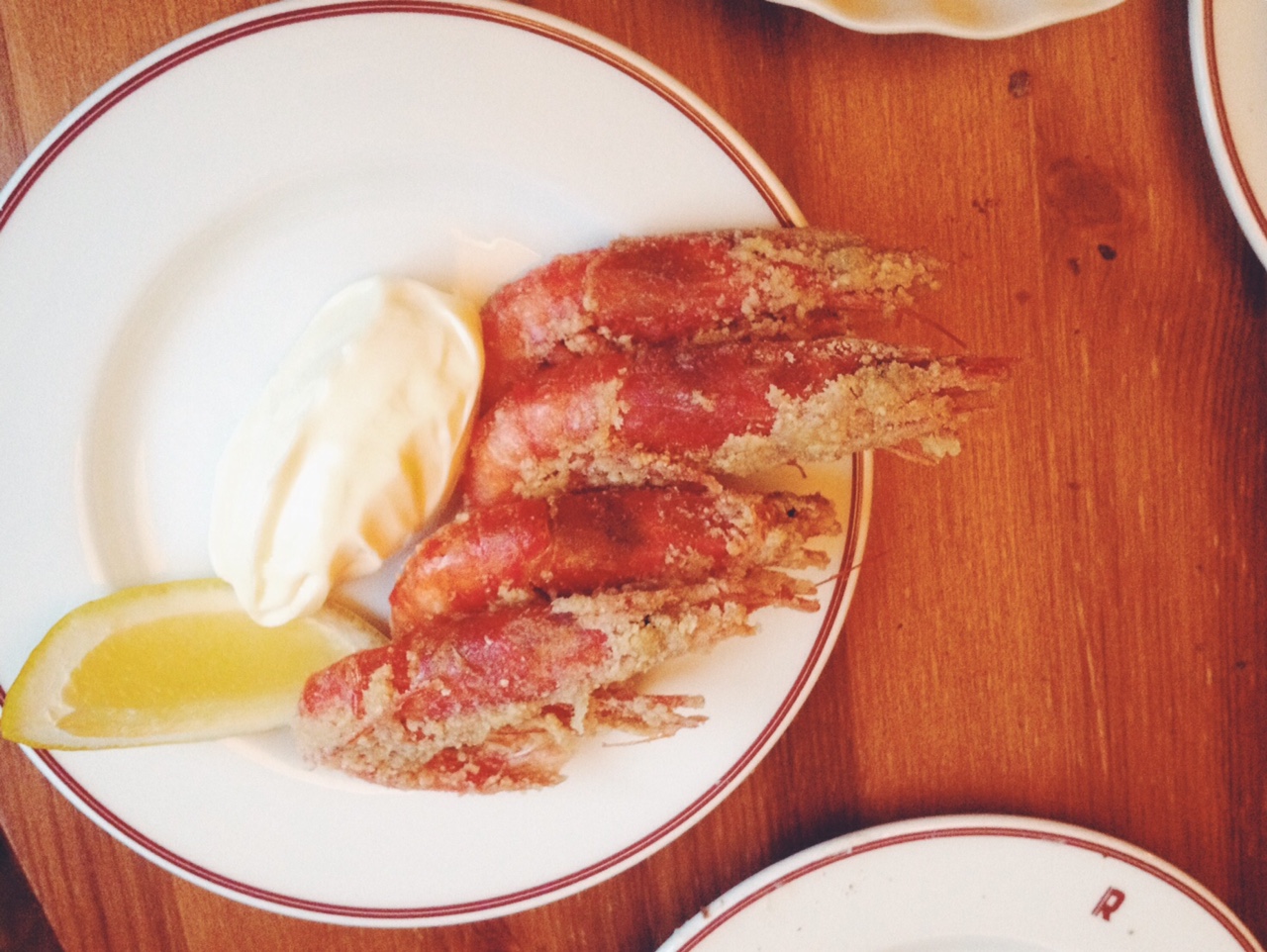 The house wine is just fine, served by the carafe for £15. Personally I’d prefer to spend money exploring the menu here as it’s too good not to order broadly, but if you’re a wino the waiters seem knowledgeable and happy to recommend from the long wine list. We get red for the mains, me opting for the monkfish, or what my boyfriend calls “chicken fish” after he tries it, thanks to its meaty texture. It’s quite simply delicious, served with al dente chickpeas and monk’s beard for a comforting, wholesome dish. 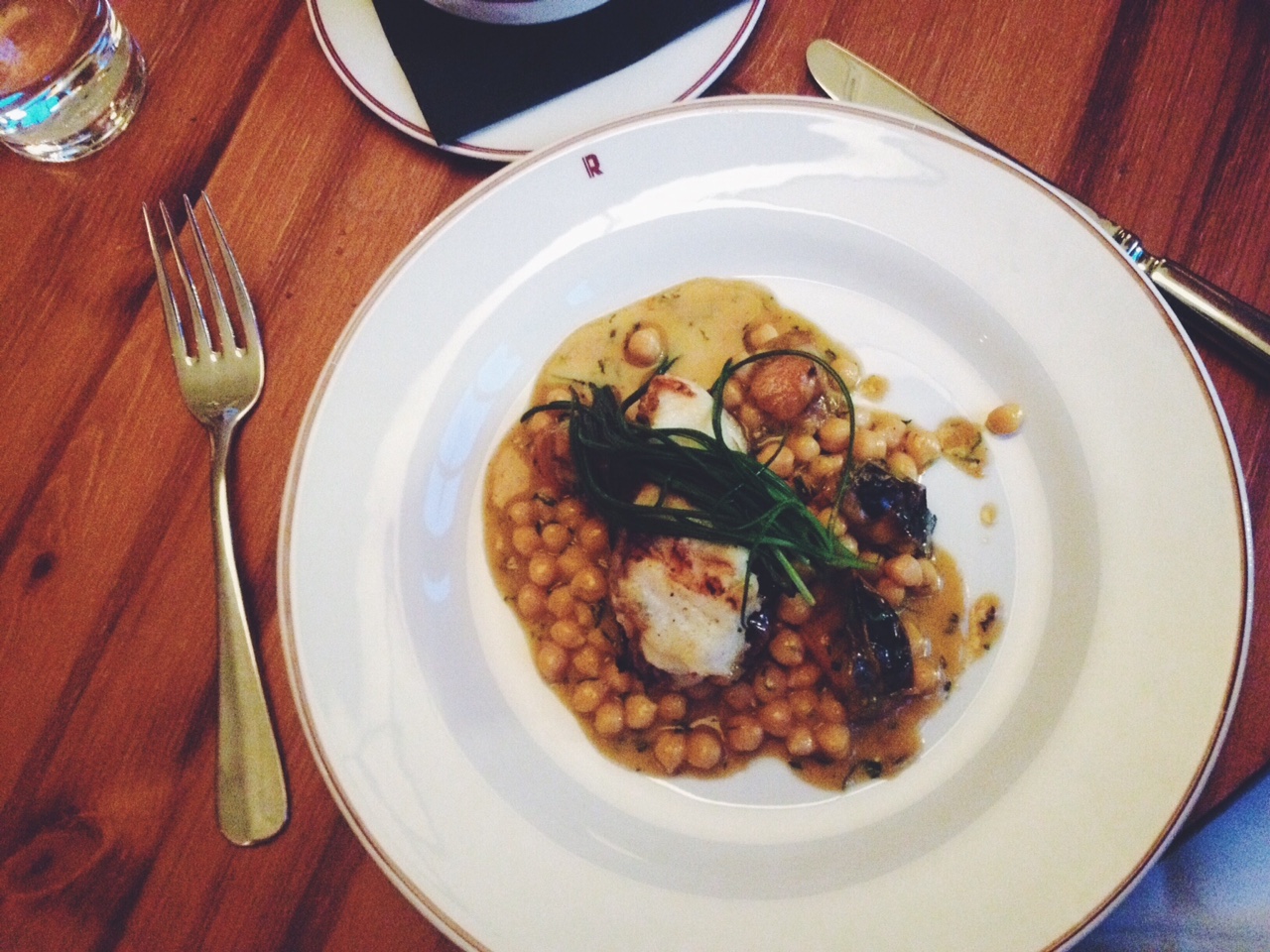 Ed orders lamb, which is roasted but kept pink in the centre, served in thick slices with a rich jus, celeriac mash, and sprouting broccoli. We can’t resist the cauliflower cheese as an extra. It’s rich and creamy, made with an English version of Raclette. Even with its pools of cheesy oil settling on top, I can’t help but spoon it into my mouth at speed. I’m still picking the grilled remnants from the side of the bowl when the waiter comes to take our plates. 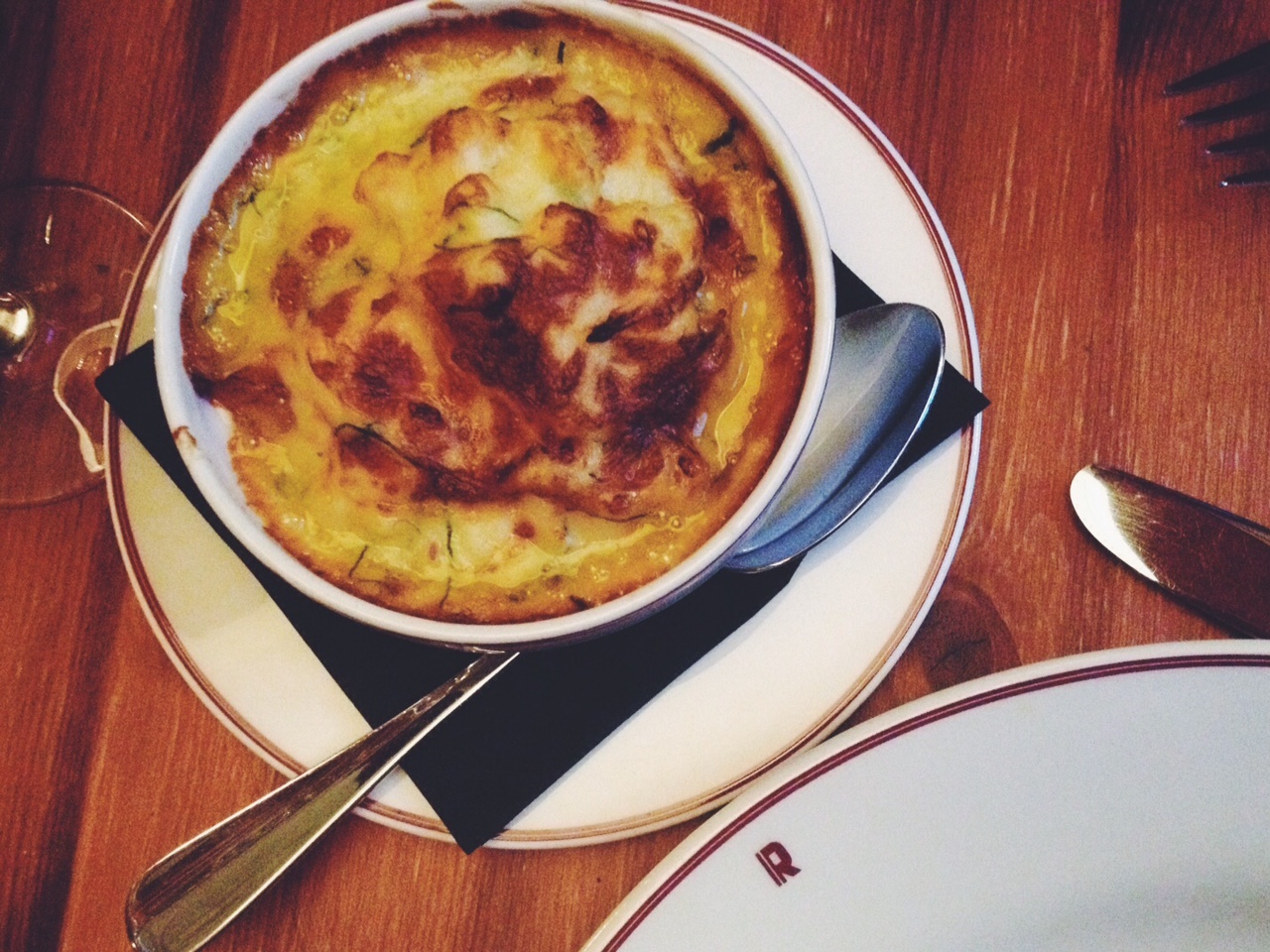 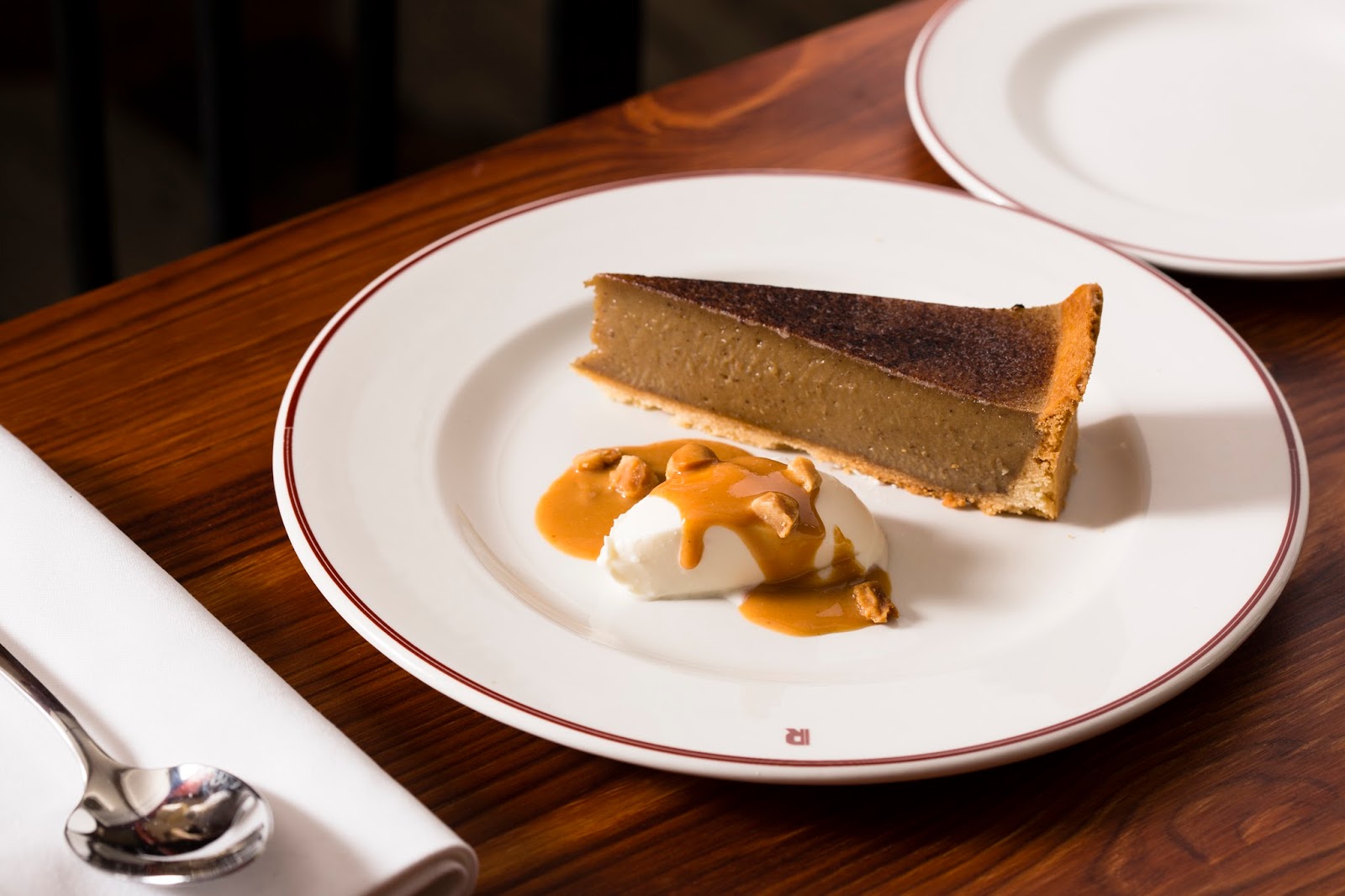 We finish things off with the banana tart, which, like the rest of our experience here, is excellent with a thick mousse-like texture, a strong banana flavour, and thin, crispy short-crust pastry. It isn’t too sweet and all I can think when I’m eating it is, should I ask to take a slice home for breakfast.
This piece was originally written for Grazia Daily

Heavy Toys
The Vegetable Moussaka That Puts Leytonstone On The Map

I'm Alice. I love running and travelling, exploring London and making healthy bits and pieces in the kitchen. I live in South East London with my boyfriend, where we're currently doing up our little first home.

Where to eat in London