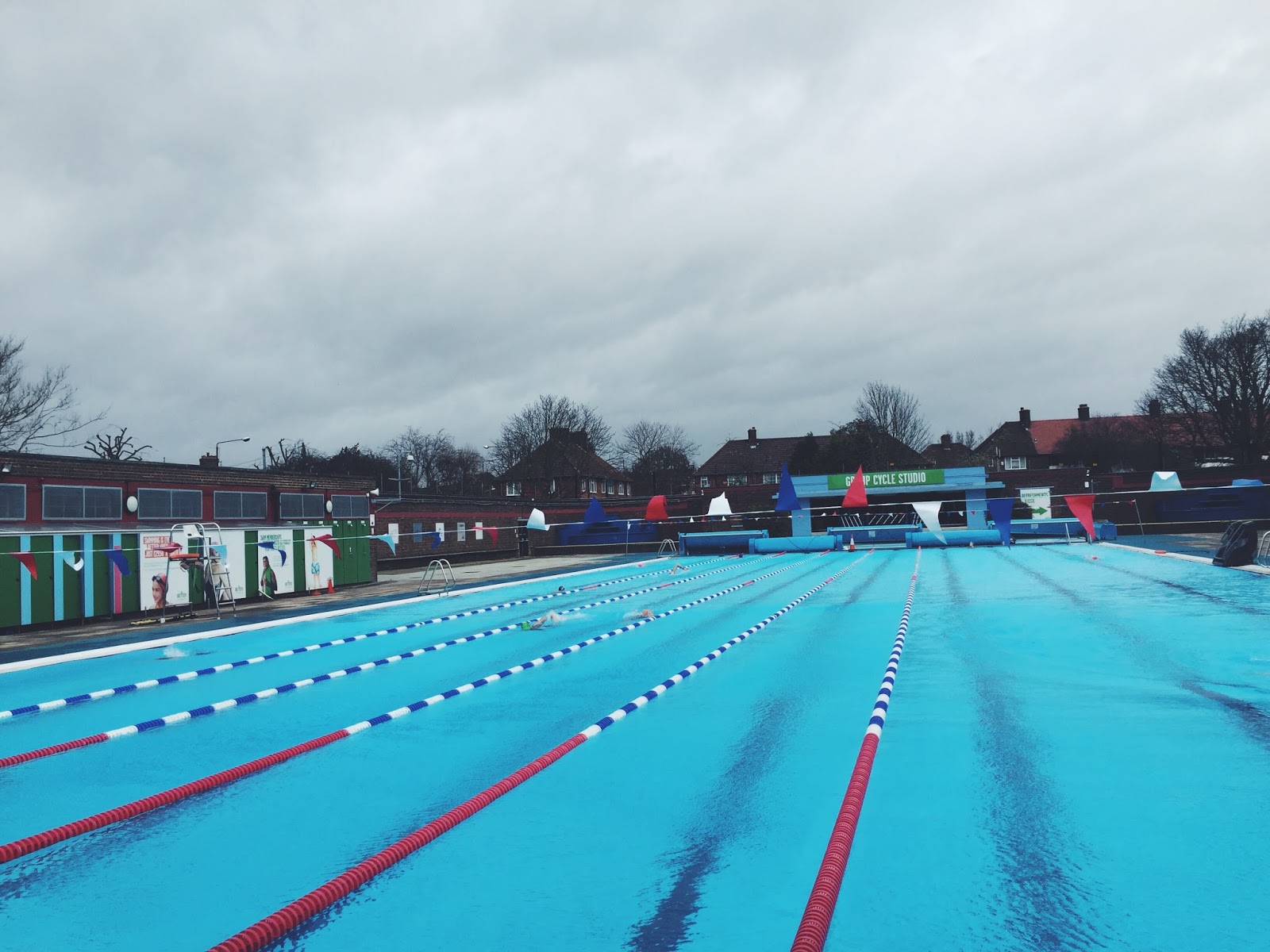 Last weekend turned out to be pretty epic and
jam-packed, despite the fact it started out with no plans. I’m not very good at
having no plans, it makes me really panic, but the weekend was initially due to be a lush girls’
weekend in Paris with Chlo — booked and ready to roll — until recent horrors
made us rethink. I know, I know we
shouldn’t let cowardly terrorism stop us travelling, but on this occasion, we’d
both felt pretty shaken up by the news, and at the last minute, just didn’t
feel comfortable going. That meant two Eurostar tickets in the bin and a suddenly
empty weekend…*panicking*.

Chlo and I spent Thursday night together
instead, and, until Ed was stuck at a job in Huddersfield, we were meant to be spending Friday night together! That never
happened, so instead, I popped into see friends who were at Dinerama instead, embraced the all-new
completely covered space, and scoffed a tofu Yum Bun and a Breddos fish taco, before
cycling all the way to Hackney Wick to Mick’s Garage with Jules. Mick’s Garage is new and bloody awesome. It’s a
multi-level warehouse at Crate Brewery that’s still very much just a warehouse, only there’s Shukshuk at the back serving Berber
& Q BBQ food, a ping pong table, a DJ blaring out tunes stood on the roof of
the kitchen, and a bar serving sour beer and Kombucha cocktails.
It’s only open at the weekend, though it’s the sort of place you want to spend
your whole weekend. Gutted, I was too full to really eat anything but I stole some
of Dom’s charred cauliflower, which was epic, as was the mac and cheese. The sour
beer (apparently all the rage in the US!) was weird but actually awesome. I’ve
got a repeat trip fixed in my diary for next weekend, and I plan to go hungry
and thirsty. 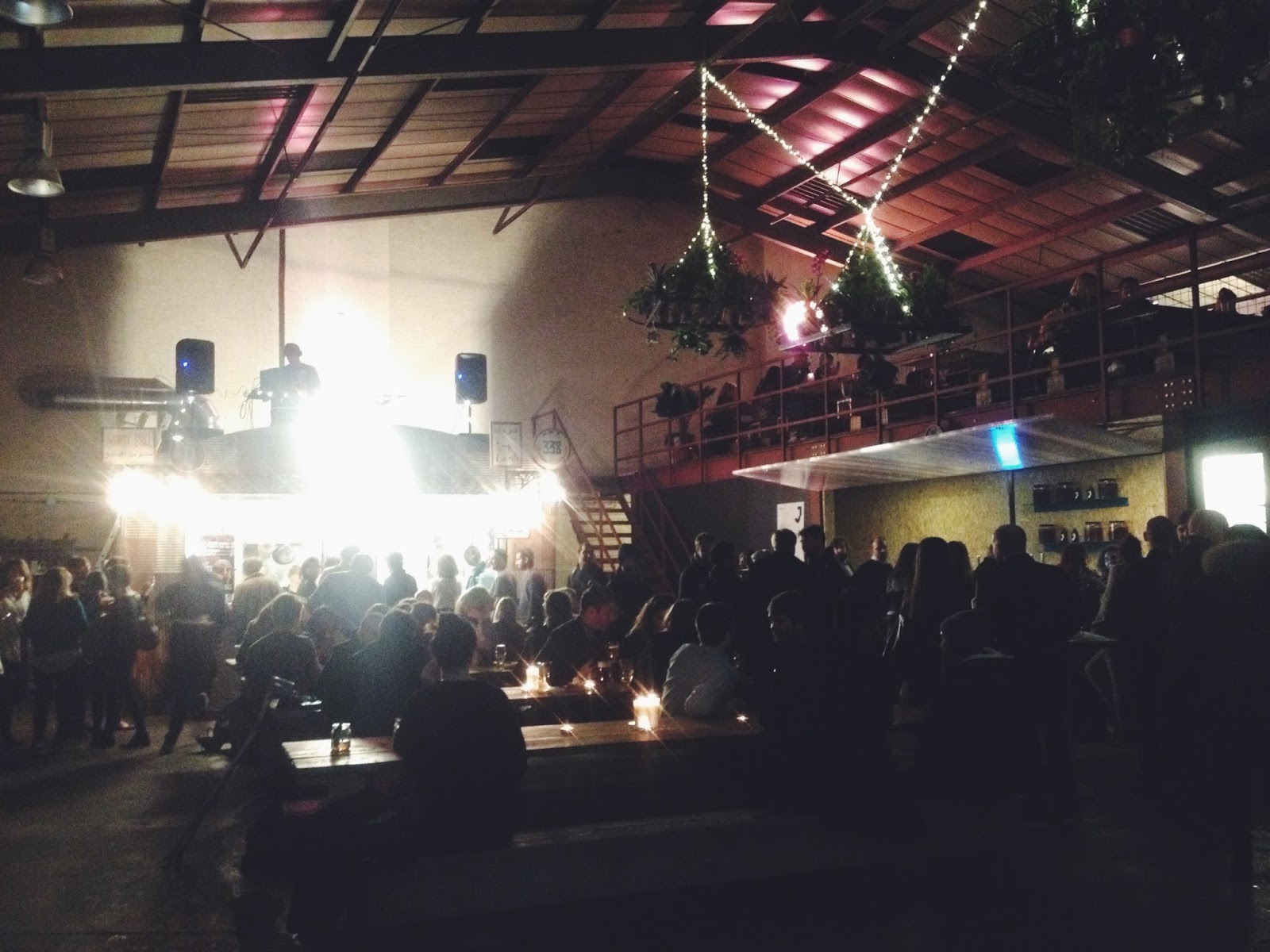 The next morning, we made a makeshift but
bloody good brunch of veggie sausage sandwiches in naan bread, with fried
mushrooms, spring onions and a little mango chutney (try it, so good!). The
rest of the day was spent productively finishing up work, him at the gym, and
so on, before we cracked open the fizz! On our balcony, we have a box of mini bottles of Prosecco, which are perfectly sized and all too appealing to crack
into! We fixed up a couple of Aperol Spritz,
pretending that we were back in Gothenburg.
Ed had a night with the boys planned that
evening, that I was strictly prohibited from going on (anyone else suffer such
segregation…?!) so we went for an early dinner at Pizza Locadelli before
going our separate ways. Pizza Locadeli is a pop-up restaurant on Upper Street in Islington. You’ve got only 3 weeks left
to catch it so BE QUICK. And you should catch it, because the food is great. Y’all know I bloody love a pizza,
but these are proper Naples-style affairs, with thin, crisp bases and rich
toppings. Ed got a truffle, potato and 3 cheeses one; I got the underrated
Caprese – so fresh and so simple, with thick slabs of mozzarella. These were after
the burrata and pumpkin starter we shared, and all washed down with two fine
Negronis. The prices are good, the space is totally unassuming (formerly a post
office, and really very little done to dress it up!), but most importantly the
pizzas are top notch. As Ed went to Peckham, I went to New Cross to
meet Shang and Lauren for a short but sweet catch up (laughter is the best
medicine!), then to bed for a sound night’s sleep before…Swim Dem Do Mo. 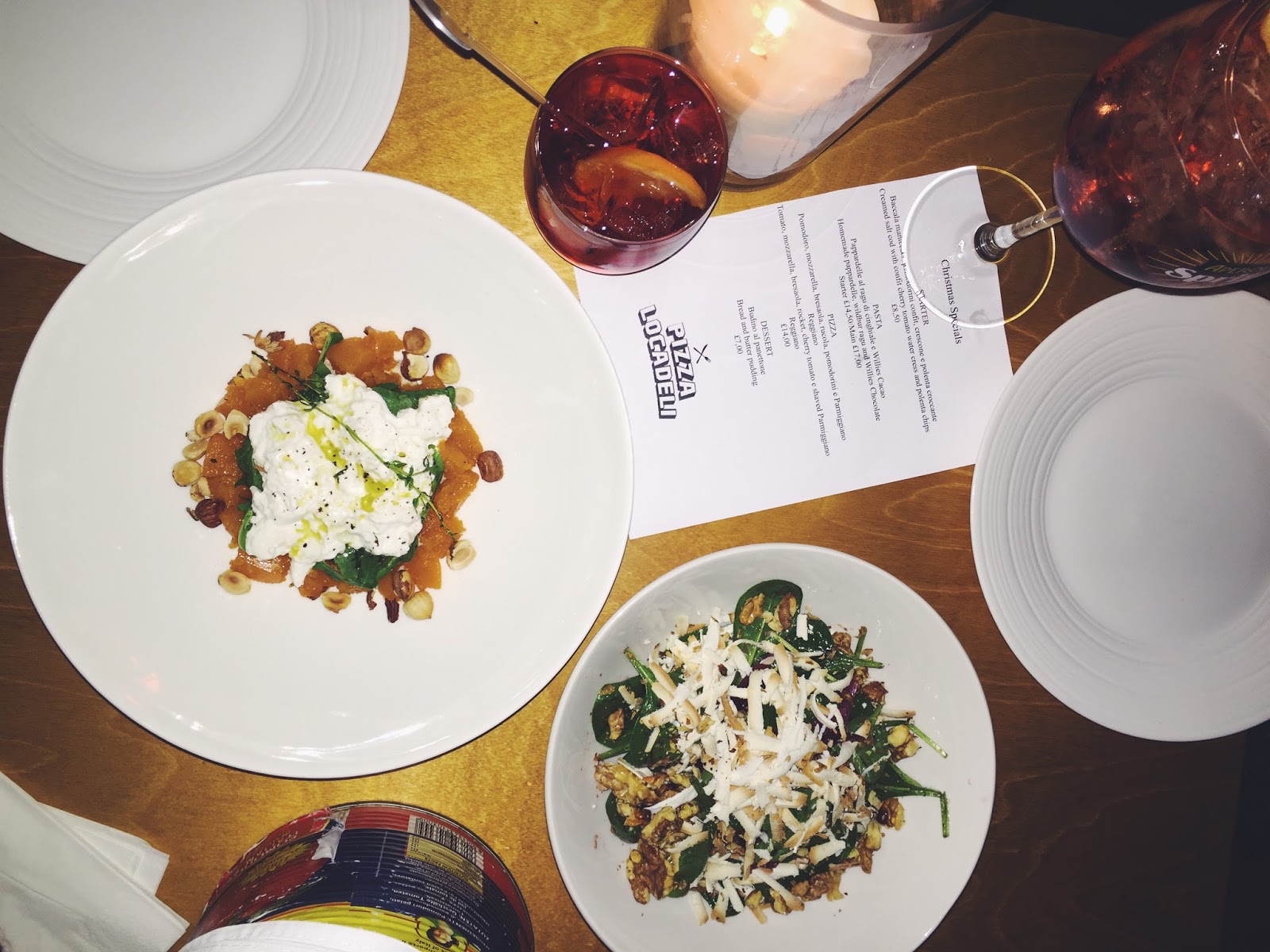 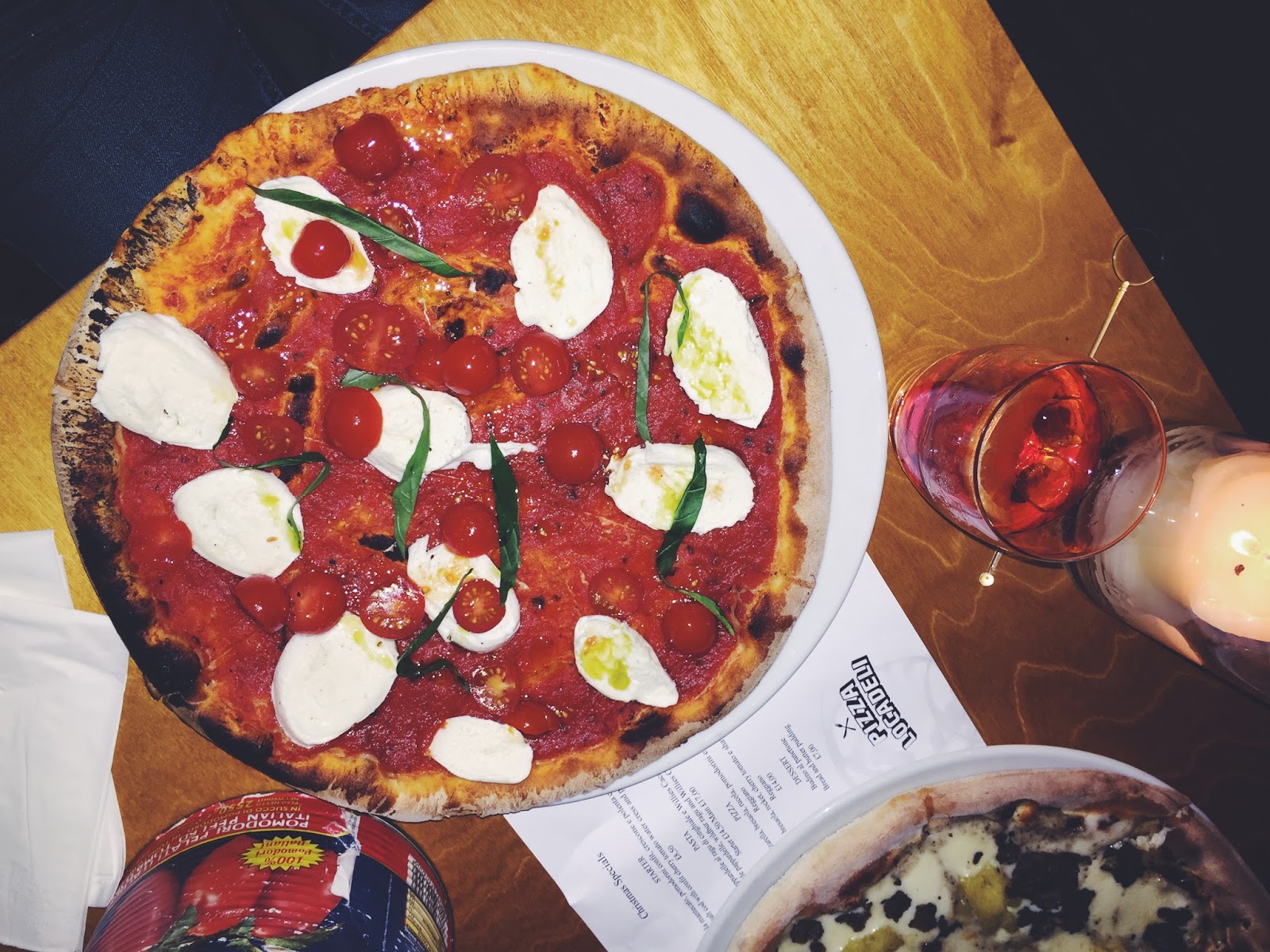 Swim Dem Do Mo(vember) was epic. Tough, but epic,
consisting of an 8km run from Canada Water, through Greenwich, then a 2km swim
at Charlton Lido. Now, the run, I knew I could do (though the conditions weren’t
great, it was blowing a gale!), but the swimming part I was feeling wearier
about. I like to think I’m a strong swimmer, though I can’t do crawl, I’ve
never swam ‘distances’, and I definitely didn’t train, but 2km was a lot more
taxing than I’d thought. It’s 40 lengths in a 50m pool…After the 10th I was
feeling pretty exhausted, by the 25th the length of the pool seemed
to have quadrupled, and it wasn’t until 44th that I thought the feat
was actually possibly in the bag. I did
the whole thing in breaststroke, my shoulders spasming by the end, my arms
numb, and my neck stiff from being craned out of the water. Should have
remember goggles… 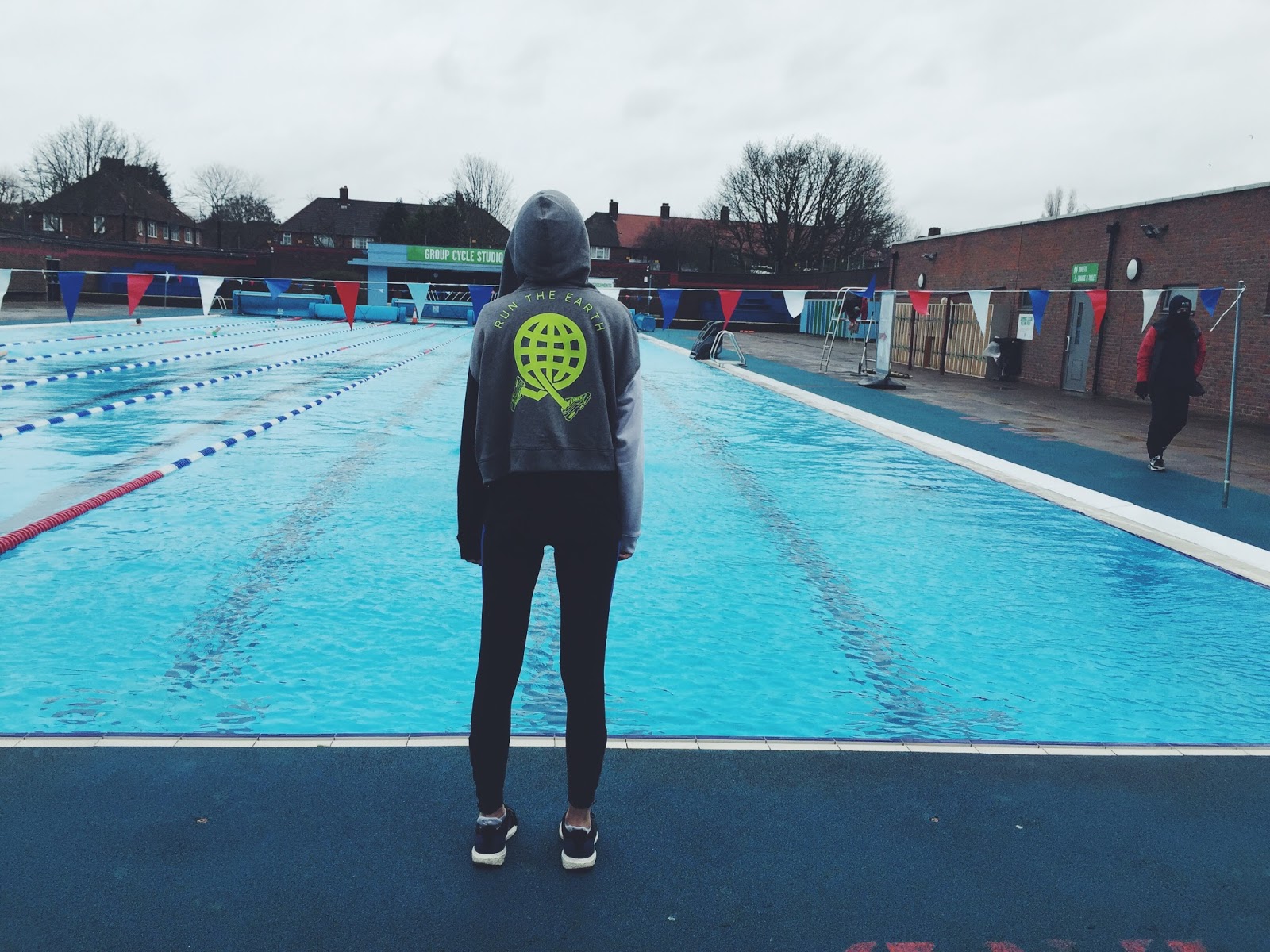 Ed pretty much pulled me out of the pool at the
end, and I was elated but shattered!
I’d completely underestimated how tough swimming 2km is — far harder than
running it, that’s for sure! — though I definitely developed a taste for it (so
much so I’ve been back in the pool already this week!) I was floppy and
pathetic in the car and seriously in need of a feed. A GOOD ONE. We went to
check out CLAW, the new crab pop-up at Three Compasses, which I’d heard good things about and highlighted in my Telegraph article. It was good. I don’t like the venue so much – Three Compasses
is very much a musty old man’s pub and not really the sort of place you want to
hang out in, sober, on a Sunday morning — but CLAW’s food was great. I got a crab
and cheese toastie (with more cheese than you’re probably meant to eat in a
month!) and Ed got a ‘BLT’ — a bacon, lobster and tomato brioche roll, which he
washed down with a particularly good Bloody Mary. If we weren’t restricted to
the brunch menu, I’d have loved to have ordered the crab and cheese arancini too…. 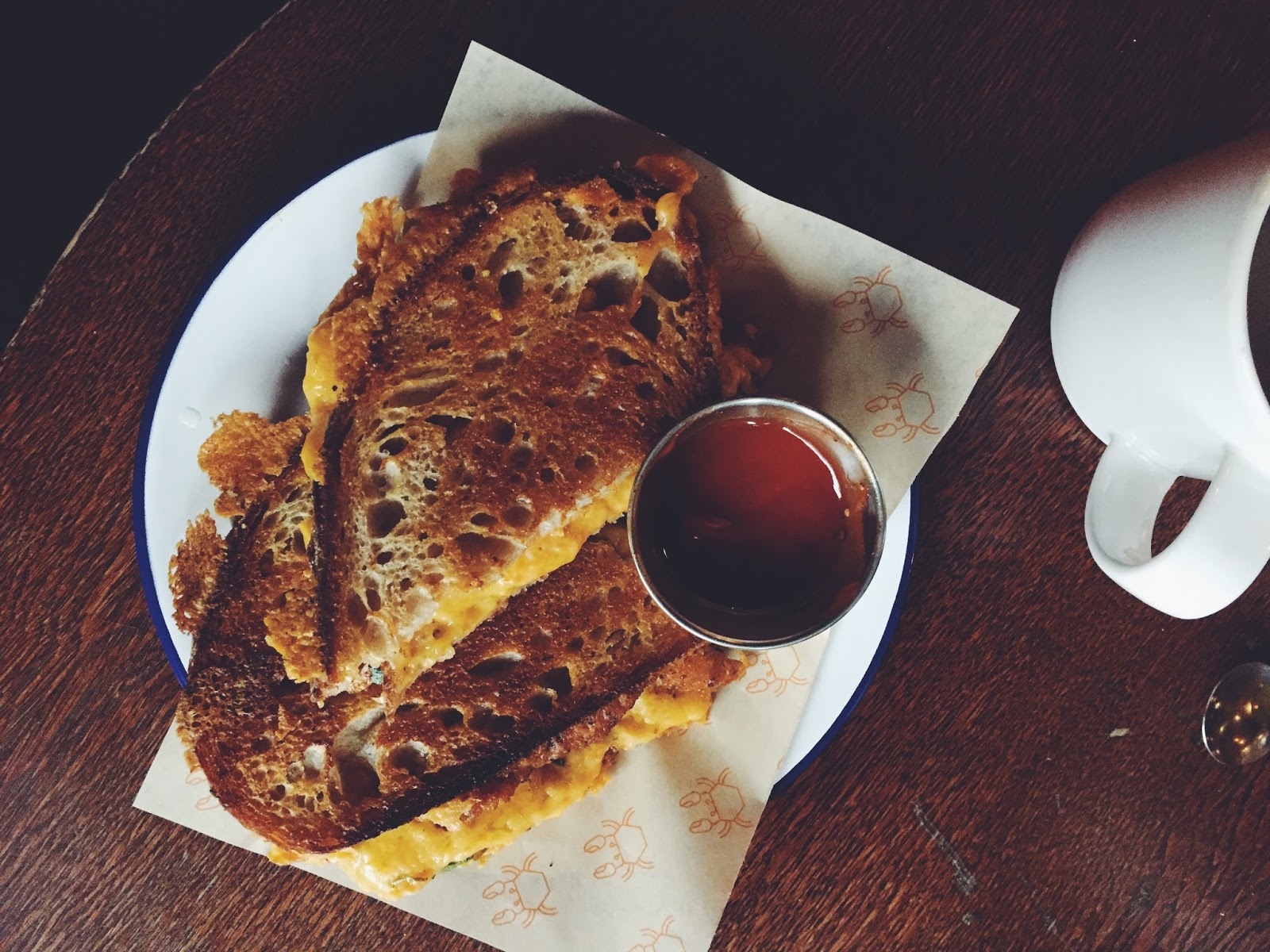 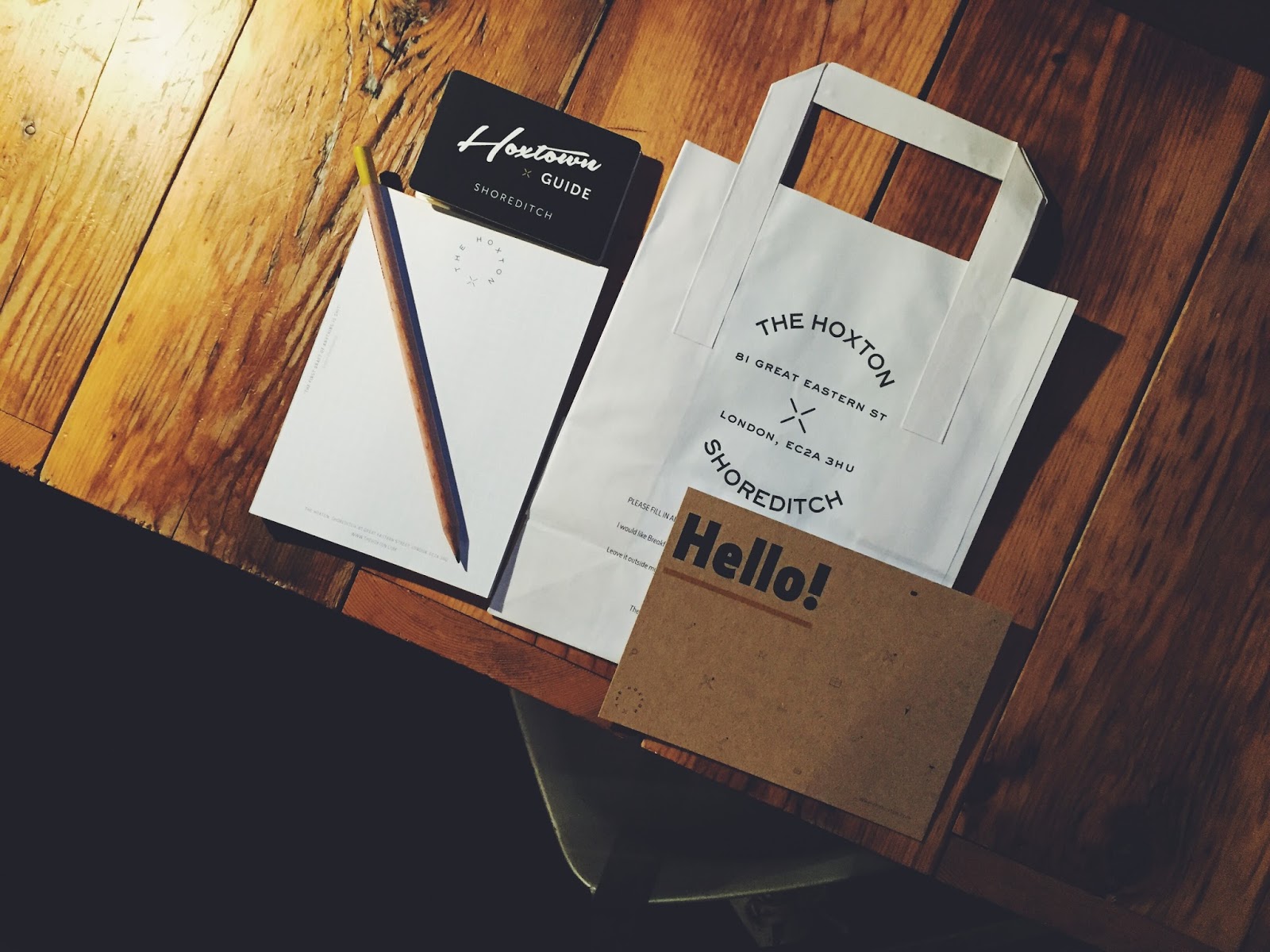 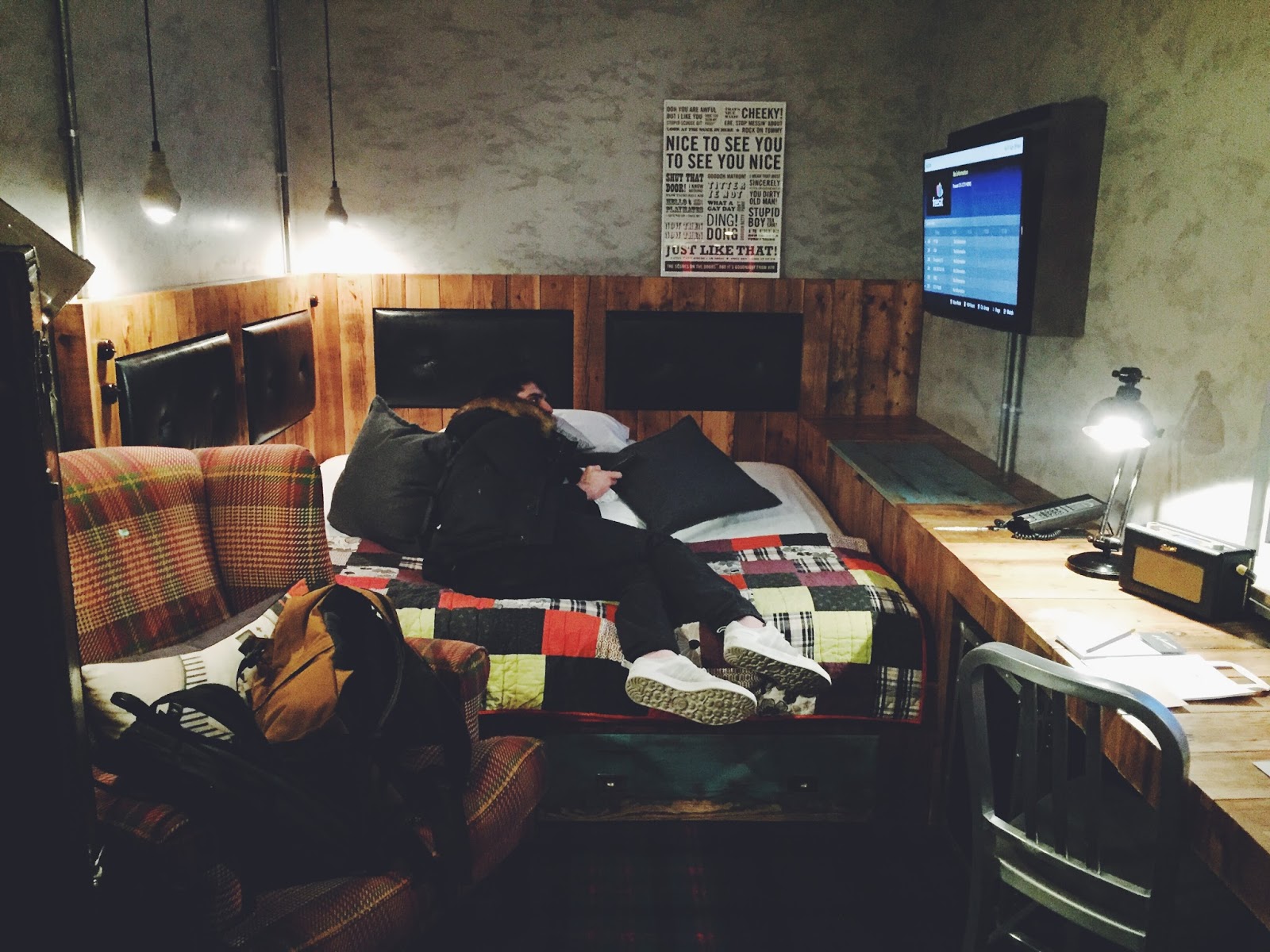 Our lush weekend closed with a bang, we stayed at The Hoxton, Shoreditch as a very
nice part of the induction for my job. There really is nothing more luxurious than
staying at a hotel in the city that you live in, is there? After checking in we
strolled down to Kick to watch
Arsenal (win!) and drink a couple of celebratory Caipirinhas, then headed back
to the hotel for dinner — sea bass for me, steak for him, and plenty of chips
on the side! We pretty much crawled into bed, seriously zonked (I omitted to
mention Ed got in at 5am on Sunday morning, and came out to watch me swim, so
was as shattered as I was!), and if any of you have stayed at The Hoxton, you
know just how good those beds are!
A MEGA WEEKEND.
Unlimited Lasagne? Sunday Night Bliss
2 Awesome Additions To Old Street

I'm Alice. I love running and travelling, exploring London and making healthy bits and pieces in the kitchen. I live in South East London with my boyfriend, where we're currently doing up our little first home.

Where to eat in London